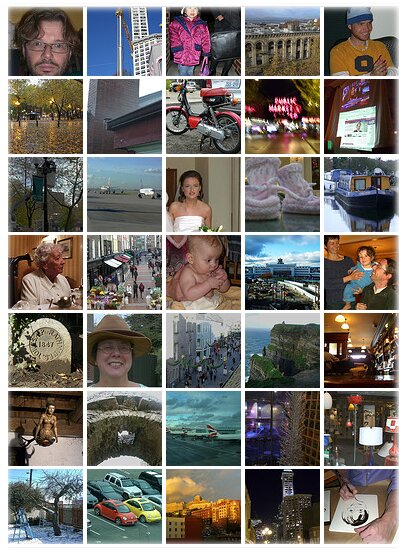 About six weeks ago, I read about Sparky’s A Picture a Day project on his blog. He in turn had been inspired by Pho­to­jo­jo’s Project 365.

Here’s how it works, for me. I take at least one photo a day, every single day for a year. Every so often, I upload the photos to my Flickr site. If I get more than one worthwhile photo in a day, great, but one and only gets tagged potd (picture of the day).

Why? Apart from the reasons enumerated by Photojojo, here’s what I get out of it.

First of all, fun. It adds a little spark to my day, to be always looking for photo ops.

Second, the constant practice makes me a better pho­tog­ra­ph­er.

Third, more photo editing and photo or­ga­ni­za­tion. His­tor­i­cal­ly, I have been much better about taking photos than I have about organizing them and editing them. This should get me off my duff about going through the thousands of photos I’ve taken since I went digital in 2001, and posting the best of them.

Before I was inspired to start this project, I had been thinking about getting a small point-and-shoot, like the Casio Exilim. When my parents stayed with us and went to Hawaii with us a month before, I had played with my mother’s Exilim and liked it. My father had also had me order another Exilim as a present for Michelle, and I had carried that around for a week.

I bought myself a Casio Exilim EX-Z1000 at CostCo. It’s 10 megapixels, which I think is overkill, but even so, I can get more than 700 photos on to a 2GB card. It came with a leather carrying case, now a fulltime resident on my belt. I’m fairly happy with it, and I think I’ve got some good results from it. But judge for yourself.

I love my other camera, a Nikon D70 digital SLR, but it’s far too bulky and heavy to carry with me all the time.

I finally uploaded the first 36 pictures to Flickr last night, after working on them for most of the weekend. It would have been sooner, but we spent 2.5 weeks in Ireland with wholly inadequate Internet access, and I was quite busy before then.

From now on, I hope to post new POTD pictures two or three times a week.

The next few posts will talk about those first 36 photos in more detail. I also intend to write up the workflow that I’m developing.