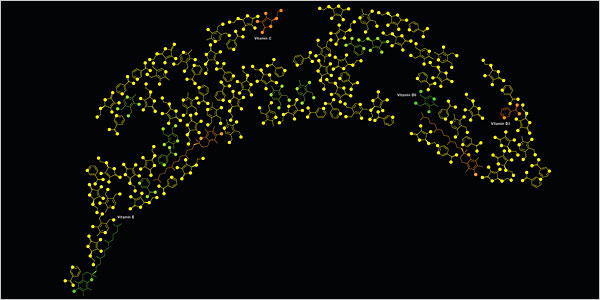 In the case of nu­tri­tion­ism [an ideology], the widely shared but unexamined assumption is that the key to un­der­stand­ing food is indeed the nutrient. From this basic premise flow several others. Since nutrients, as compared with foods, are invisible and therefore slightly mysterious, it falls to the scientists (and to the jour­nal­ists through whom the scientists speak) to explain the hidden reality of foods to us. To enter a world in which you dine on unseen nutrients, you need lots of expert help.

Another po­ten­tial­ly serious weakness of nu­tri­tion­ist ideology is that it has trouble discerning qual­i­ta­tive dis­tinc­tions between foods. So fish, beef and chicken through the nu­tri­tion­ists’ lens become mere delivery systems for varying quantities of fats and proteins and whatever other nutrients are on their scope. Similarly, any qual­i­ta­tive dis­tinc­tions between processed foods and whole foods disappear when your focus is on quan­ti­fy­ing the nutrients they contain (or, more precisely, the known nutrients).

But what about the elephant in the room — the Western diet? It might be useful, in the midst of our deepening confusion about nutrition, to review what we do know about diet and health. What we know is that people who eat the way we do in America today suffer much higher rates of cancer, heart disease, diabetes and obesity than people eating more tra­di­tion­al diets. (Four of the 10 leading killers in America are linked to diet.) Further, we know that simply by moving to America, people from nations with low rates of these “diseases of affluence” will quickly acquire them. Nu­tri­tion­ism by and large takes the Western diet as a given, seeking to moderate its most dele­te­ri­ous effects by isolating the bad nutrients in it — things like fat, sugar, salt — and en­cour­ag­ing the public and the food industry to limit them. But after several decades of nutrient-based health advice, rates of cancer and heart disease in the U.S. have declined only slightly (mortality from heart disease is down since the ’50s, but this is mainly because of improved treatment), and rates of obesity and diabetes have soared.

He concludes with some rec­om­men­da­tions:

To medicalize the diet problem is of course perfectly consistent with nu­tri­tion­ism. So what might a more ecological or cultural approach to the problem recommend? How might we plot our escape from nu­tri­tion­ism and, in turn, from the dele­te­ri­ous effects of the modern diet? … So try these few (flagrantly un­sci­en­tif­ic) rules of thumb, collected in the course of my nu­tri­tion­al odyssey, and see if they don’t at least point us in the right direction.

1. Eat food. Though in our current state of confusion, this is much easier said than done. So try this: Don’t eat anything your great-great-grand­moth­er wouldn’t recognize as food. (Sorry, but at this point Moms are as confused as the rest of us, which is why we have to go back a couple of gen­er­a­tions, to a time before the advent of modern food products.) There are a great many foodlike items in the su­per­mar­ket your ancestors wouldn’t recognize as food (Go-Gurt? Breakfast-cereal bars? Nondairy creamer?); stay away from these.

2. Avoid even those food products that come bearing health claims. …

3. Especially avoid food products containing in­gre­di­ents that are a) unfamiliar, b) un­pro­nounce­able c) more than five in number — or that contain high-fructose corn syrup.None of these char­ac­ter­is­tics are nec­es­sar­i­ly harmful in and of themselves, but all of them are reliable markers for foods that have been highly processed.

4. Get out of the su­per­mar­ket whenever possible. You won’t find any high-fructose corn syrup at the farmer’s market; you also won’t find food harvested long ago and far away. What you will find are fresh whole foods picked at the peak of nu­tri­tion­al quality. Precisely the kind of food your great-great-grand­moth­er would have recognized as food.

5. Pay more, eat less. The American food system has for a century devoted its energies and policies to increasing quantity and reducing price, not to improving quality. There’s no escaping the fact that better food — measured by taste or nu­tri­tion­al quality (which often correspond) — costs more, because it has been grown or raised less in­ten­sive­ly and with more care. …

“Eat less” is the most unwelcome advice of all, but in fact the scientific case for eating a lot less than we currently do is compelling. “Calorie re­stric­tion” has repeatedly been shown to slow aging in animals, and many re­searchers (including Walter Willett, the Harvard epi­demi­ol­o­gist) believe it offers the single strongest link between diet and cancer prevention. … To make the “eat less” message a bit more palatable, consider that quality may have a bearing on quantity: I don’t know about you, but the better the quality of the food I eat, the less of it I need to feel satisfied. All tomatoes are not created equal.

6. Eat mostly plants, especially leaves. Scientists may disagree on what’s so good about plants — the an­tiox­i­dants? Fiber? Omega-3s? — but they do agree that they’re probably really good for you and certainly can’t hurt. Also, by eating a plant-based diet, you’ll be consuming far fewer calories, since plant foods (except seeds) are typically less “energy dense” than the other things you might eat. Veg­e­tar­i­ans are healthier than carnivores, but near veg­e­tar­i­ans (“flex­i­tar­i­an­s”) are as healthy as veg­e­tar­i­ans. Thomas Jefferson was on to something when he advised treating meat more as a flavoring than a food.

7. Eat more like the French. Or the Japanese. Or the Italians. Or the Greeks. Con­found­ing factors aside, people who eat according to the rules of a tra­di­tion­al food culture are generally healthier than we are. Any tra­di­tion­al diet will do: if it weren’t a healthy diet, the people who follow it wouldn’t still be around. … In the case of the French paradox, it may not be the dietary nutrients that keep the French healthy (lots of saturated fat and alcohol?!) so much as the dietary habits: small portions, no seconds or snacking, communal meals — and the serious pleasure taken in eating. (Worrying about diet can’t possibly be good for you.) Let culture be your guide, not science.

8. Cook. And if you can, plant a garden. To take part in the intricate and endlessly in­ter­est­ing processes of providing for our sustenance is the surest way to escape the culture of fast food and the values implicit in it: that food should be cheap and easy; that food is fuel and not communion. …

9. Eat like an omnivore. Try to add new species, not just new foods, to your diet. The greater the diversity of species you eat, the more likely you are to cover all your nu­tri­tion­al bases. …