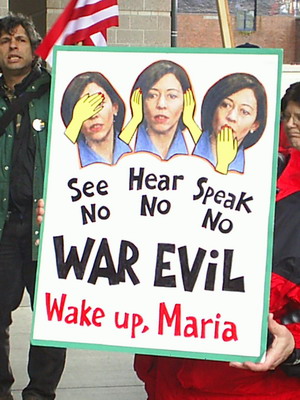 I got a reply from Maria Cantwell’s office, regarding the email that I sent about Attacking Iran. Clearly no brain cells were used in sending out this form response.

Thank you for contacting me to express your concerns for the de­vel­op­ment of nuclear weapons in Iran. I appreciate hearing from you on this important issue.

As you may know, in­ter­na­tion­al nuclear inspectors continue to monitor whether Iran is developing nuclear weapons. Such a program would be in con­tra­ven­tion to the nuclear non-pro­lif­er­a­tion agreement that Iran has signed. In November 2004, the countries of Britain, France, and Germany negotiated an agreement with Iran, in which Iran agreed to cancel its nuclear programs. Un­for­tu­nate­ly, Iran has recently backed away from its com­mit­ments. The In­ter­na­tion­al Atomic Energy Agency (IAEA) has reported that Iran is ac­cel­er­at­ing its nuclear fuel enrichment activities and has failed to comply with in­ter­na­tion­al nuclear inspectors. Specif­i­cal­ly, Iran began resuming uranium conversion in August 2005 and then announced its intentions to begin research on enriching uranium in February 2006.

On May 31, 2006 the Bush Ad­min­is­tra­tion decided to change course and join diplomatic talks with Iran, along with the United Kingdom, France, and Germany. I believe that the United States must engage in real diplomacy and work with Russia, China, and other countries to deal with Iran. We cannot permit Iran to build or acquire nuclear weapons.

During the debate on the Defense Au­tho­riza­tion bill, Senator Joseph Biden (D-DE) introduced an amendment calling on Iran to suspend its enrichment program and to cooperate with the In­ter­na­tion­al Atomic Energy Agency. The amendment was agreed to, with my support, in a vote of 99 to 0.

Please be assured that I will continue to press for progress towards a verifiable diplomatic solution.

Thank you again for contacting me to share your thoughts on this matter. Finally, you may be interested in signing up for my weekly update for Washington state residents. Every Monday, I provide a brief outline about my work in the Senate and issues of importance to Washington State. If you are interested in sub­scrib­ing to this update, please visit my website at http://cantwell.senate.gov. Please do not hesitate to contact me in the future if I can be of further assistance.

For future cor­re­spon­dence with my office, please visit my website at http://cantwell.senate.gov/contact/index.html