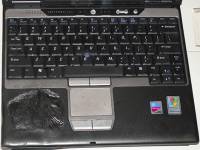 My laptop scared the crap out of me last night. I came home to find it in a completely un­re­spon­sive state: it would not wake up. The hard disk LED was a solid green. I power cycled it and it refused to boot.

It did, however, boot from a Kubuntu Edgy CD, but it did not recognize the hard disk. In des­per­a­tion, I booted into the BIOS and played with the disk-related menus. That fixed the problem, but I don’t know what went wrong, and my faith is shaken in the re­li­a­bil­i­ty of this system.

I bought the laptop just over three years ago, shortly before I quit Microsoft, as a re­place­ment for the work laptop that I had been using. It’s served me well. I have a reasonably beefy desktop system of the same age, but I almost always use the laptop instead. It’s a Compaq Presario X1012QV, with a 1.3GHz Centrino, a WXGA screen, 35GB hard disk, and 1280MB RAM. It had 512MB RAM originally, but I replaced one of the 256MB sticks with a 1GB stick last year, making it more pleasant to use.

For several months now, I’ve been planning to buy a new Vista-ready laptop this spring, with a Core 2 Duo, ~100GB disk, and 2+GB RAM. I want a 64-bit CPU so that I can oc­ca­sion­al­ly run Win64; e.g., to update the Win64 port of Vim. I’m severely tempted by Apple and expect to end up with some kind of Mac laptop — my first ever Mac. I was hoping to hold out until Mac OSX 10.5 (Leopard) comes out sometime this spring, but the latest rumors say that it’s "edging the very limit of the definition of ‘Spring’ — i.e. mid-June". If the Presario craps out on me again, I’ll replace it in short order.

Whether I go with Mac or stick with a PC, I’ll continue to run multiple OSes. Kubuntu Linux has been my primary operating system since last June, and I think it’s unlikely that Vista will replace it. OSX may well do so.