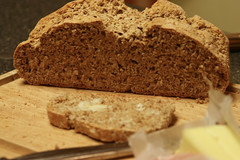 There’s little that I miss about Irish cooking. One notable exception is Brown Bread aka Brown Soda Bread. I don’t know of any bakery that makes it in the States, though I’ve found it at a couple of Irish pubs. The main difficulty in making it is finding the coarse-ground wholemeal flour. The usual fine-ground stuff has the wrong texture.

This recipe is adapted from Best of Irish Home Baking by Biddy White Lennon. The quantities shown here make a 6" loaf.

Called a ‘cake’ in many homes and just brown bread in others, this is the national loaf. It is made with varying amounts of wholemeal and plain white flour and (depending on the mood of the cook) small amounts of extra in­gre­di­ents like wheat germ, wheat bran, oatmeal, or various seeds. Sometimes a small amount of butter, or even an egg, is added and oc­ca­sion­al­ly, a little treacle/molasses. The exact amount of buttermilk needed depends on the flour and the weather–I mean it!

Pre-heat the oven to 200C/400F/Gas 6. The reaction of bi­car­bon­ate of soda [baking soda] and buttermilk is swift and the duration of their in­ter­ac­tion short­—speed is of the essence.

Mix the flours, salt and soda in a mixing bowl. Add only enough buttermilk to make a soft dough. [The original recipe calls for one scant cup of but­ter­milk; I always need more than a cup to absorb the flour.] Flour your hands and the work surface and knead lightly (by hand, never with a machine) until the dough is smooth. It is important to understand that this is quite unlike making a yeast-risen dough. Shape into a circle about 4cm/1½ inches deep. Take a sharp, well-floured knife and cut a deep cross in the top. Place on a baking sheet and bake for 40–45 minutes.

To see if it is fully cooked test by tapping the bottom and listening for a hollow sound. Cool on a rack or, if you like a soft crust, wrapped in a linen or cotton tea-cloth. Eat the same day.

[Best eaten with butter or jam. Great when toasted too.]

A slightly more open texture may be achieved by adding two heaped ta­ble­spoons of wheat or oat bran and enough extra liquid to absorb the bran (about 60 ml/2 fl oz/¼ US cup).

There are probably as many ‘secret’ additions to the basic loaf of soda bread as there are home cooks (and chefs in restau­rants who pride themselves on baking bread daily). Pinhead oatmeal and oatflakes are common additions, so too is wheat germ. While sesame seeds and sunflower seeds probably head the list of common additions today, caraway seeds have a long history in Irish baking, par­tic­u­lar­ly in seed cake, sometimes known as Convent Cake probably because it continued to be made in Irish convents long after its popularity waned in ordinary households. Caraway seeds are still, oc­ca­sion­al­ly, added to soda bread as a surprise extra.