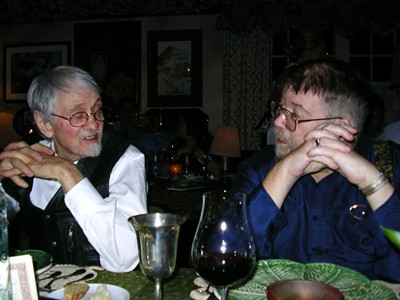 My friends Frank and Lyndol met 32 years ago today, the day they celebrate as their an­niver­sary. For several years, Emma and I have brought them out for dinner on this date. We also celebrate Lyn’s birthday, which falls next week.

Frank’s health has been poor for some years, but it’s grown worse this year. He spent six weeks in hospital in September and October. He’s home now, but he’s in hospice care.

Naturally, we try to see him often, since he rarely feels strong enough to leave the house, even in a wheelchair. We almost always find him in good form, glad to see us and ready with his stories.

He’s somewhat stronger than when he left hospital. They’ve been provided with a hospital bed as part of the hospice care, but he’s still sleeping in his own bed while he can.

We had hoped to take them to Szmania’s in Magnolia for dinner tonight. It didn’t work out as planned, alas. Lyndol showed up alone: Frank had felt too weak to come. In truth, he was also worried about the icy roads and getting about.

The three of us ate dinner together. The pheasant was par­tic­u­lar­ly good. It was a fine meal, but not the same without Frank.

We brought the dessert back to their house, surprising Frank who was very happy to see us.

I would wish them many more years together, but it’s not to be.