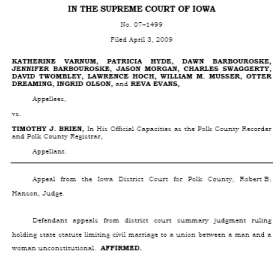 I am greatly heartened by today’s news of Iowa’s Supreme Court unan­i­mous­ly striking down the state’s gay marriage ban. The passage of Propo­si­tion 8 in California was a setback. The Iowa Court made a strong ruling, gutting the arguments against same-sex marriage.

It’s hard to believe now that in­ter­ra­cial marriage was illegal in many states until 1967. President Obama’s parents could not have married in those states. We look back at that now with bemusement and a little horror. The opposition, then as now, was led by cultural con­ser­v­a­tives, making religious arguments.

Someday soon, we’ll look back at the gay marriage debate with the same bemusement and wonder what all the fuss was about.