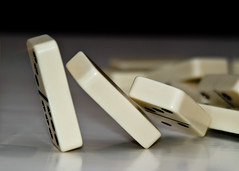 A month ago, Vermont and Iowa passed gay marriage laws. Today, Maine and New Hampshire did the same. The Maine Governor has already signed it into law. The NH leg­is­la­ture passed a law, but it’s possible their governor will veto it.

It’s as if there were a pro-gay marriage backlash after the anti-gay marriage Propo­si­tion 8 passed in California last year. Courts and leg­is­la­tures are realizing the fun­da­men­tal unfairness of denying the benefits of marriage to all committed couples. The sky didn’t fall when Mass­a­chu­setts legalized gay marriage five years ago.

There’s no immediate prospect of a gay marriage law being enacted in Washington State. Last month, the state leg­is­la­ture passed a law extending all of the state-given benefits of being married to registered domestic partners. There was some talk amongst the Religious Right of a ballot initiative to repeal this DP benefits law, but there seems to be little appetite for it. 40–45% of Washington state voters favor gay marriage, while another 20–25% favor domestic part­ner­ships.

In other news, today is the ninth an­niver­sary of my wedding to Emma. Our marriage doesn’t feel at all threatened by events in New England.