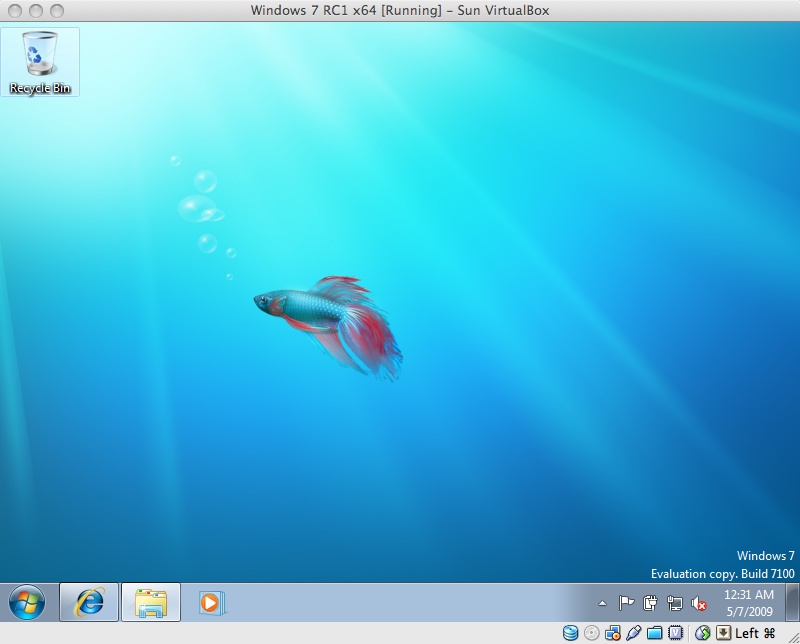 I ported Vim to Win64 but I don’t have a convenient Win64 system to test it on.

I decided to install the Win64 build of the Windows 7 RC on VirtualBox, which has supported 64-bit guest operating systems since version 2.0.

It worked without problems on my MacBook Pro. I used Vir­tu­al­Box’s Virtual Media Manager to mount the Windows 7 ISO and installed from that. See also the handy guide. (Why does Windows 7 offer a choice of upgrading from a previous version of Windows on a virgin disk?) After completing the in­stal­la­tion of the operating system, I installed the Guest Additions for mouse pointer in­te­gra­tion and other goodies.

As always with VirtualBox VMs on my MacBook, I had to fix the Network settings to work over WiFi. When the VM is turned off, go to Settings, choose the Network tab. Change “Attached to” from “NAT” to “Bridged Adapter” and “Name” from “en0: Ethernet” to “en1: AirPort”. Tip: to get a right-click without a mouse, place two fingers on the trackpad and click the trackpad button, or Shift+F10.

I tried installing the Win64 build of Win 7 on my Win32 Vista desktop box at work. The host system blue­screened within seconds of starting the installer! I filed ticket 3963.

I had in­ad­ver­tent­ly installed the Win32 build first on my work system. That worked fine. It also seemed to have snappy disk I/O. When I unzipped the Win64 Vim binaries (not having realized yet that I had the Win32 Win 7), it was slower than unzipping in the host operating system, but not un­rea­son­ably so. On my MacBook, the details pane from the Win 7 zip extractor said that it was running at a mere 260KB per second, which is pitiful. It certainly wasn’t that slow when installing the OS onto the virtual disk.