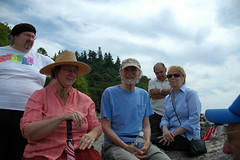 Lyn, Raven, and Iain came over on Friday night for dinner. We did a little planning for Frank’s memorial today and selected some poems.

Emma and I packed up the car and got to Lyn’s by noon, which gave us plenty of time to set up. I wore my com­mem­o­ra­tive Portland motsscon t-shirt, which I know Frank would have gotten a kick out of.

A dozen or so of Frank’s friends arrived around 2 o’clock. We chatted for a while waiting for Holly and Kim to arrive after fighting through the crowded ferry system from Vashon Island. Shirley sang You’re Not So Easy to Forget, while Lyn ac­com­pa­nied her on the keyboard. We moved outside and I read Black Cats & Broken Gates in the front yard, where it was written.

We carpooled to nearby Seahurst Park, one of Frank’s favorite beaches, sat down on some logs and rocks, and reminisced about Frank for more than an hour. We told stories about Frank, how we had met him, his early life, things that we recalled. A common theme was that Frank was a great con­ver­sa­tion­al­ist who could discourse eloquently on so many topics. We talked about the love of old movies that he shared with Lyndol, his taste in food, his longtime friendship with Ron Zimmerman of the Herb Farm restaurant. We talked in particular about his being a poet and we read the poems that I had brought.

We went back to the house and ate and drank for a couple of hours. Lyn had stayed up till midnight preparing two of his signature desserts, apples with cookies and a Norwegian pastry. I finally got to meet Holly whom Frank had been telling me about for as long as I had known him. We made a plan to go over to Vashon Island on September 12th to scatter Frank’s ashes.

I know Frank would have enjoyed himself immensely if he had been there. A shame he wasn’t. Maybe we should celebrate people while they’re still alive.