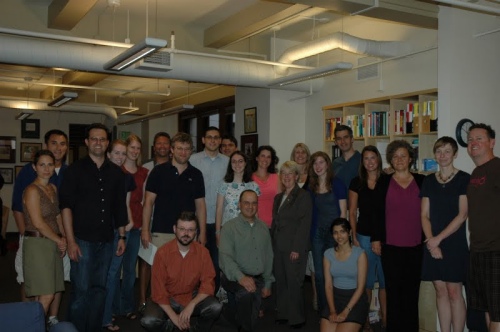 Senator Patty Murray visited us at Cozi this morning. She was there to hear from small business people about healthcare reform and she met with half-a-dozen local small business owners, including our CEO, Robbie Cape. I sat in on the meeting as an observer to take photos.

We heard a number of stories.

Jason runs a record store. When they decided to insure all of their employees, it meant that everyone had to take a pay cut. One guy didn’t want to take part, but Jason convinced him. Weeks later, that guy broke his arm and ended up in the emergency room. Not long after, the same guy had another accident. Later he said that he’d have been completely broke without the insurance.

Debbie runs a restaurant on Capitol Hill. She said that she was ashamed to admit that she couldn’t afford to offer health insurance to all her em­ploy­ees—her margins are too low. Debbie’s insurance broker told that her premiums are higher because she’s in the wrong zip­code—lots of HIV-positive people on Capitol Hill—and because she has a 60-year-old employee.

Jason’s self-employed girlfriend became pregnant. They had to search hard to find a policy that did not consider pregnancy to be a pre-existing condition!

Will has a self-employed friend who is a healthcare exile. His friend has been unable to find health insurance in the US as he has diabetes. Instead, he and his family live in France where they’re enjoying the French system.

Robbie firmly believes that it’s important to have great healthcare for all his employees and their families. But this raises his costs and places him at a com­pet­i­tive dis­ad­van­tage.

Karen is in her early sixties and has adult onset diabetes. She has insurance by the skin of her teeth, some grand­fa­thered coverage. If she lost that, it would cost $500 to cover her, another $500 for her husband, and another $500 for her medicine. $1500 is almost the cost of her mortgage. She’s trying to take care of herself and hang on for Medicare.

Robbie was galled that Cozi’s insurance costs are going up by 25–35% every year. Small businesses have no leverage to negotiate with the insurers.

Patty talked for a while about the work that her HELP committee has been doing. They’ve passed a bill out of committee, but the Finance Committee is still at work on their own bill. Under the public option, her bill reimburses half of the cost of the premiums to companies with fewer than 50 employees.

The public option would spread the risk across a much larger pool, which should help drive down costs. Those of us who have insurance now are paying about $1000 each to cover the costs of cat­a­stroph­ic care for the nearly 50 million who are uninsured.

There was unanimous agreement that the current system is un­sus­tain­able and becoming ever more un­af­ford­able. All present were in favor of the public option.

Patty is having a number of small meetings. She feels that they’re more productive than town halls. I can only agree. She said that her office is getting constant calls from both sides.

Patty posed briefly for group photos, before leaving for her next meeting.

There was more, but that’s all I can dredge up from memory at this late hour.

Afterwards, we posted an innocuous update to the CoziFamily fan page, “WA State Sen Patty Murray just stopped by our office to talk about small biz per­spec­tives health care reform. With more than eight of us in the room, there was UNANIMOUS support for a public option!” A firestorm im­me­di­ate­ly broke out in the comments. Our very own townhall :(

(Why Cozi? Back in June, a handful of us, including my colleagues Will and Mira and I, met with our rep­re­sen­ta­tives to push for the public option. We got an en­thu­si­as­tic reception from Patty Murray’s office; less so from Maria Cantwell’s staff. A couple of weeks later, our group put on a rally outside the Federal building where both senators have their Seattle offices. Then Robbie was asked to make a statement for a press release from Patty, which led to his being asked to host this meeting.)