I’ve spent some time this evening profiling a Python ap­pli­ca­tion on Windows, trying to find out why it was so much slower than on Mac or Linux. The ap­pli­ca­tion is an in-house build tool which reads a number of config files, then writes some output files.

Using the Run­SnakeRun Python profile viewer on Windows, two things im­me­di­ate­ly leapt out at me: we were running os.stat a lot and file.close was really expensive.

A quick test convinced me that we were stat-ing the same files over and over. It was a com­bi­na­tion of explicit checks and implicit code, like os.walk calling os.path.isdir. I wrote a little cache that memoizes the results, which brought the cost of the os.stats down from 1.5 seconds to 0.6.

Figuring out why closing files was so expensive was harder. I was writing 77 files, totaling just over 1MB, and it was taking 3.5 seconds. It turned out that it wasn’t the UTF-8 codec or newline trans­la­tion. It was simply that closing those files took far longer than it should have.

What’s MsMpEng.exe? It’s Mi­crosoft­’s an­ti­mal­ware engine, at the heart of Windows Defender. I added my build tree to the list of excluded locations, and my runtime halved. The 3.5 seconds of file closing dropped to 60 mil­lisec­onds, a 98% reduction.

The moral of this story is: don’t let your virus checker run on your builds. 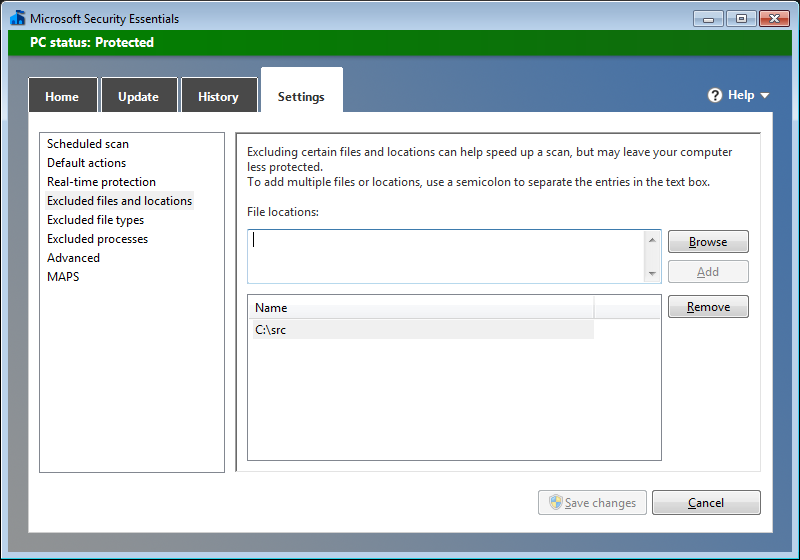