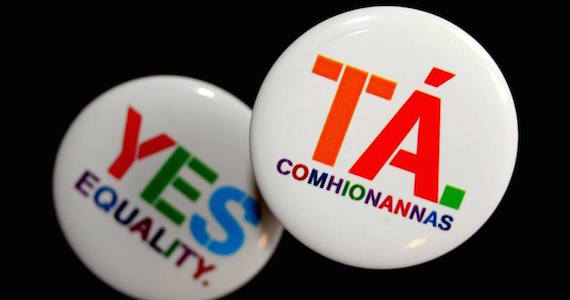 I woke up this morning to the news that Ireland’s referendum on Marriage Equality looked set to pass with a strong majority. Tears began running down my face as I read the reports of con­stituen­cy after con­stituen­cy voted "Yes". I’m crying again as I write this.

When I was growing up as a bisexual teenager in Dublin in the late 1970s and early ‘80s—out to no-one but myself—it was hard to imagine a day like this. Hardly anyone then had the fortitude to live openly as gay, if they could pass for straight. Queers and pansies and poofs were objects of derision and occasional violence. It wasn’t until after I emigrated that ho­mo­sex­u­al­i­ty was finally de­crim­i­nal­ized in 1993.

But Ireland has changed since my teens. Not all for the better, but on LGBT acceptance, massively so. People have come out of the closet in large numbers. The influence of the Catholic church, rocked by sexual scandals, has declined. The young Irish are over­whelm­ing­ly pro-gay. They voted Yes yesterday in large numbers. I was touched to hear that thousands of ex­pa­tri­ates came #home­tovote. But it’s not just the young, as swathes of Irish people from all age groups and all de­mo­graph­ics voted for equality.

I’m so proud today to be Irish, to be a full citizen in my native country at last. I’m so thankful that the Irish people came out so strongly for equality.

Let me close now with the final words from Molly Bloom‘s soliloquy that ends Ulysses:

and yes I said yes I will Yes.