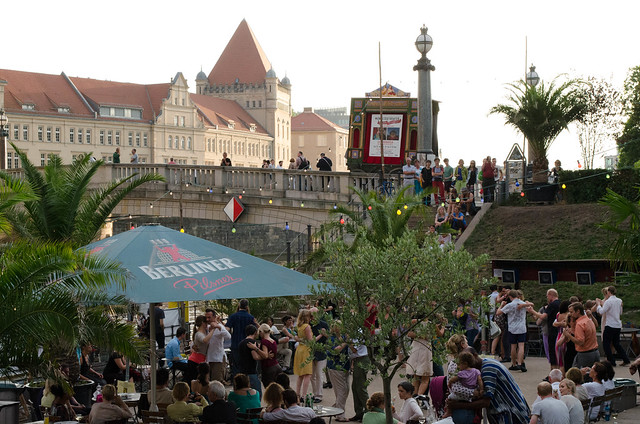 Emma and I are going to spend most of June and all of July 2015 in Berlin.

Two years ago, our friend Joanna announced that she was going to spend a year in Paris with her husband and daughters. This got us thinking about spending a year in Europe ourselves. After con­sid­er­ing Bilbao and some other cities, we eventually decided upon Berlin. We had both studied German in high school or college; Berlin is a vibrant cultural city, full of history and art; it’s a tech hub and a startup magnet; and it’s con­ve­nient­ly located for travel within Europe.

We spent a week there last year in early August, staying with our friend Sven. One afternoon, we took a most enjoyable boat tour of the Spree river and the canals with Sven and another friend, Daniel. Afterwards, we spent some time at Daniel’s apartment in Mitte, in the former East Berlin.

We had been thinking of going back in the late summer of this year for six or eight weeks and working remotely from Berlin, as a trial run for perhaps spending a year there. When Daniel—who lived in Seattle for many years before retiring to Berlin—e­mailed us in early March, enquiring if we would like to swap homes while he spent two months in Seattle, we were im­me­di­ate­ly interested. I arranged to work remotely and we bought tickets. We arrive in Berlin on June 9th, where we will stay at Daniel’s apartment. He’ll be there for a couple of days before he flies to Seattle and stays at our house until early August. We’re expecting guests in Berlin, including my parents for a week and my sister Michelle and her husband for a few days. We leave Berlin for Dublin on July 31st, then on to New York state on August 5th, to see soc.motss friends in upstate New York and stay with my brother Mark near NYC. We return to Seattle on August 13th, after nine-and-a-half weeks away.

I’m going to be working remotely, while Emma hopes to do some modeling for artists and knit some garments on commission. We also intend to explore Berlin and get to know the city much better. It should be a lot of fun.