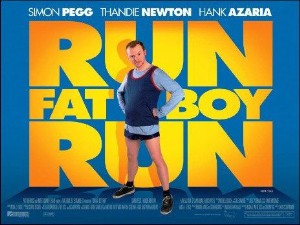 Run Fatboy Run is a Simon Pegg comedy from 2007, which we just watched. I didn’t have high hopes for it and it was better than I expected. Dennis left a pregnant Libby (Thandie Newton) at the altar five years ago. Now he’s an overweight security guard in a London lingerie shop and she’s found a new boyfriend who’s everything that Dennis is not: Whit (Hank Azaria) is well off, handsome, and very fit. Somehow Dennis ends up promising to run in a marathon in three weeks’ time that Whit is also running in. Much of the story revolves around his training, his desperate attempts to win over Libby, and his struggles with Whit, who turns out to be an arsehole. It’s funny and oc­ca­sion­al­ly bit­ter­sweet and quite enjoyable.