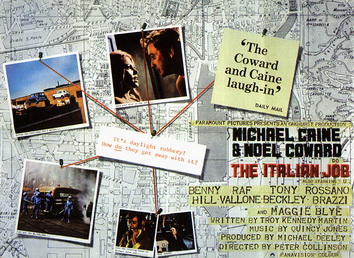 The Italian Job movie is worth your time. One of the quin­tes­sen­tial movies of the Swinging Sixties, its British sen­si­bil­i­ty wears well, almost 50 years on. The humour still works. And it’s probably the best ad­ver­tise­ment that the Mini ever had.

Charlie Croker (Michael Caine) has inherited a plan to rip off $4 million in gold bullion from Fiat in Turin. He and the lads are going to help the balance of payments by bringing the loot back from the Common Market. (They’re proto-Eu­roskep­tics.) And they’re going to do it by causing the mother of all traffic jams and making their getaway in three little Mini Coopers.

Don’t expect too much coherence from the plot. There’s at least 20 minutes of gloriously improbable chase scene set pieces where the three Minis perform balletic moves and lose another police Alfa Romeo or two. The literal cliffhang­er ending is a classic. As with most comedies of the time, the char­ac­ter­i­za­tion is weak—we learn a bit about what makes Croker and crime boss Bridger (Noël Coward) tick, but the rest are ciphers. No matter. The plot ticks along and it delivers.