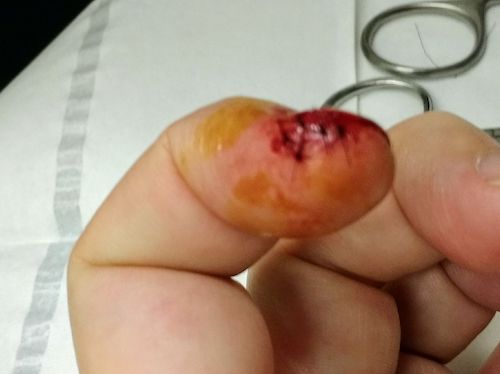 I’ve had stitches before, but never from a self-inflicted cut. Five stitches this morning from a bread knife slipping on a stale loaf that I was going to toast. I never did get that snack.

For­tu­nate­ly, it hasn’t been painful. The stitches should come out in 7–9 days. Meanwhile, typing is awkward and slow.

My brother David when he was eight or nine nearly ruined his thumb with a chisel. He was using it to make a wooden sign for his cub scout troop. The chisel slipped and jammed into the back of his left thumb. He didn’t sever the tendon and he got the full use of his thumb back, but he still has an ugly scar.

Within a year or two of David’s accident, my father lost the tip of his index finger. He was making a deposit into a night safe when some keys got in the way as the door swung closed. He flipped them out of the way, but his fingertip didn’t clear the gap in time. For­tu­nate­ly his own father was present and took him for medical treatment. He has a divot missing from the tip of his right index finger. Vincent, unlike his children, is left-handed so it wasn’t quite as much of a loss as it sounds.

Life! No-one gets out without scars.